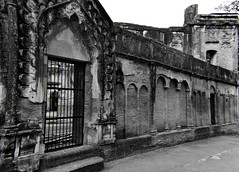 I checked myself in the mirror after I’d gotten dressed for college. I found myself pretty presentable. A pair of jeans and a casual top – something which made me feel truly comfortable, truly me. My thick layered hair (which often had a mind of its own), was caged within an elastic band, fighting to break open. I slung my backpack over my shoulder. Time to leave.

My mother probably didn’t hear my reply. Her hands were already inside my closet,digging for the “prettiest” and most figure-hugging attire they could find; and succeeded.

“Girls your age should wear fitting clothes with bright colours.” she retorted. “You look so fat in that black top you’re wearing. And comb your hair for heaven’s sake! It’s so dry and…

By the time I’ll publish this post it will be midnight somewhere in the east and noon in the west. My Sunday has been pathetic. The only thing that I did was to wipe off my running nose. The tissue roll which pretty much was resting inside a cupboard yesterday found a new home today. I hate the combination of running nose, fever and rain. It has been raining since morning and this makes my cold even worse. As a matter of fact I haven’t seen the sun since 11 days now and the forecast suggests that the 1 in the ten’s place of that digit could become 2! Ahhh….I hate monsoon!!

Everything seems so pathetic when you suffer from cold and cough. As a matter of fact I haven’t seen a face today. Received only a few calls and by few means only 1 and that too of my mom! I was pretty much on the bed and spent the day staring at the gruesome clouds and listening to the ridiculous tic-tok of the clock. Time often runs slow when you do not want it to and of-course it has a habit to run fast on the eve of any examination! Later in the day I somewhat managed to get up bring me some stuff to eat so that I could have Harmon Morse’s invention- Paracetamol & Combiflam. I know that sounds a little geek-ish but I have this habit of behaving idiotically nonsensical half-witted obtuse dumb when it comes to a running nose. The one thing that I observe is that how difficult it is for a person suffering from cold to tolerate voice and sounds. I mean the distant mutterings of your neighbors seems so gibberish! You just seem to curse them for it!

Anyway it’s time for Paracetamol again. I leave you all with a quote that I happen to read a few days back.

“Whereas it is difficult for everything to work out easily,
A man cannot even afford to be a human”

We are past 15th which happens to be the Independence day of India. We also are past 12th which happened to be the day of my college re-opening! And today perhaps is the day when I slept for 12 hours on the trot- missed the alarm and then the 4 classes that were lined up!( I dislike attending college everyday)

I had to re-locate yet again from my home-town to this little place called Manipal which probably is 2500 kilometres away from home. After spending 3 odd months at home, this was difficult considering my mother is not keeping well. Anyway I had to come and so I’m here! I usually dislike boarding the plane chiefly because of the train route. Yes, the train route! The train goes via Chiplun, Ratnagiri, Roha, Goa and many other picturesque town that lie on the western ghats which perhaps are the most beautiful mountain ranges I’ve seen specially in the monsoon. And this is exactly why I ended up spending my 36 odd hours of my journey at the train’s door looking at the nature instead of my berth! Yes I know it can be dangerous but who cares! You probably would have known by this time that I’m a sort of a person who if given an option to stay in Vegas or in Alaska would choose the second one! Hell Yeah!!

Life in Manipal is always good. Well, this is the only place that I know of which seems to follow some wayward season shifts that pretty much are unknown elsewhere in India- winters from July to mid-November and summers for the rest of the year! So its like when whole of the country burns in the scorching Indian summer, Manipal definitely is the place to be at the first place and when the country sleeps in their cozy quilt, you will burn literary!

My first week has been good, really good. I bunked the class today(Saturday) and Thursday was a national holiday. Therefore I had so many more hours with me for myself! No, I’m not a narcissist! It’s just that I don’t like going to college- everyday you wake up at 7, go to college at 8, sit in their for 8 odd hours and return till 6! C’mon, I’ve been following this lifestyle ever since my diaper days! I acknowledge the fact that one get to know things while sitting in the class- I use to do it and still try to do but things have changed! There is a thing called the Internet on which you’ll probably get most the things you need- from Wikipedia to pirated stuff!! My college has this 75% attendance thing according to which if in any circumstance you have less than that then you have to embrace yourself to face the music- which in many cases is a year back! This is so pathetic, I mean we are no more kids who necessarily need a classroom environment to get the stuff going. Anyway I’ll share my views on this topic in some other posts.

Coming back, I’ve purposely chosen a hostel that’s close to a valley and this makes it quite far from the Academic Blocks- the place where we have our classes. On second floor, my room faces that valley and scenery is just awesome.

Sorry for the not-so-good photo. Took from my Nokia 5 MP camera phone. Ahh! I’m so used to SLR sensors!

Signing off for now and hope that this semester would be as great as the previous one. Take care. Cheers!

I’m bored’ is a useless thing to say. I mean, you live in a great, big, vast world that you’ve seen none percent of. Even the inside of your own mind is endless; it goes on forever, inwardly, do you understand? The fact that you’re alive is amazing, so you don’t get to say ‘I’m bored.

My Guru died,
Not in an ashram
nestled in the Himalayas,
nor in the house
of a rich patron
He died on the street
next to the garbage dump
across the street from my house.
On the same spot
where he begged for years,
his leprosy finally eating
into his vital organs.
He never spoke
except with his fierce eyes
that challenged me to look at him,
at his decaying face,
not with pity
nor with charity
not even with compassion
But with the knowing
that his rotting body was mine
and mine was his,
and all that separated us
was chance
A chance,
less significant
than a speck of dust

Shekhar Kapur who perhaps is one of the more critically acclaimed Indian director and the author of this beautiful poem which he titled “My Guru” in a blog post he made 8 years ago. I perhaps am lucky enough to find this. Beautifully written!

The two most important days in your life are the day you are born and the day you find out why.

Pretty similar to the previous photo I uploaded in terms of technical aspects. The wind was strong so it became important to bump up the shutter speed so as to have a not-so static subject but also not to increase it so high which perhaps would have resulted in a static one! But that depends upon individuals. Some people like it that way, some don’t! Again photographed on the same day as the previous one but in a completely different conditions. The sun was still setting as you can see the background is bright. The bokeh effect that you see is primarily because I used a shallow DOF(depth of field). For those with a technical eye, EXIF is